The record-setting 2020 Atlantic hurricane season is another reminder of the importance of using insulated metal roof panels that withstand high velocity winds, especially in critical infrastructure projects such as hospitals, fire and rescue and other essential government buildings.

Colorado State University hurricane experts have even increased their forecast for storm activity since July 8, now calling for a total of 24 named storms, including 12 hurricanes and five major hurricanes in 2020.

Coastal and inland communities must be prepared for the next Katrina or Ike that could affect hurricane-prone areas.

Hurricane Ike made landfall in Galveston, Texas in 2008 and with an estimated $38 billion in property damage with winds as high as 145 miles per hour and left a legacy of blue tarps covering damaged roofs from Houston all the way to Ohio.

In the wake of Ike’s wrath, FEMA issued a bulletin to recommend best practices for designing and installing metal roofs to enhance wind resistance in gusts of 90+ miles per hour.

One of the photos from the FEMA publication even showed a standing seam metal roof system that survived Hurricane Andrew in 1992 in Florida and estimated wind speeds of 170 miles per hour.

Green Span Profiles is convinced that there isn’t a building project in existence that would not benefit in some fashion from the utilization of Green Span Insulated Metal Panels, especially RidgeLine Standing Seam Roof Panels when it comes to protecting critical infrastructure in high wind regions.

This patented metal panel system is designed to resist water infiltration under hydrostatic pressure and has standing seams, which raise the joint between panels above the water line.

In addition to Ridgeline’s interior tongue-and-groove joint, the panel system is installed with a factory-caulked batten, which adds another layer of water protection. 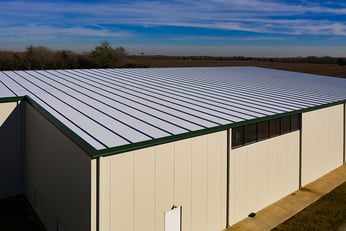 Jaks is justifiably proud of RidgeLine’s Florida certification: “The State of Florida Building Code is one of the strictest in the nation therefore, we believe these certifications are significant achievements.”

The core is a continuously poured-in-place polyisocyanurate insulating foam. The panels can be used on slopes as low as 1/2:12 and come in standard lengths measuring 12 to 53 feet with custom lengths available on demand.

Contact Green Span Profiles today to learn more about these exterior and metal panels which are available in 26-,24- and 22-gauge Galvalume steel.